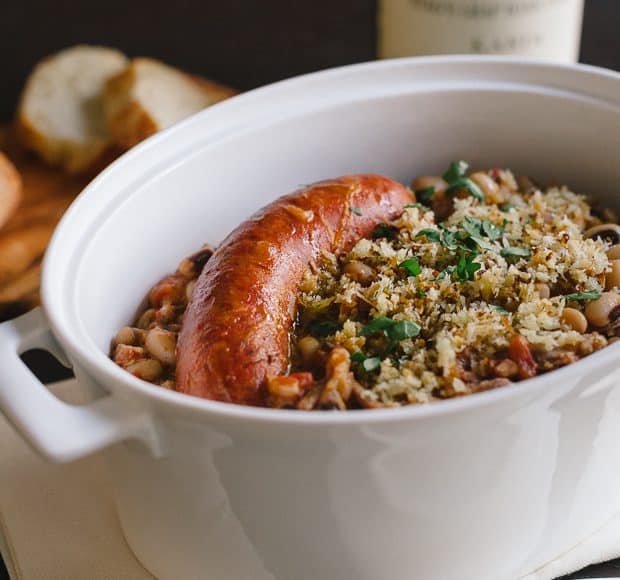 Cook this Black Eyed Pea Cassoulet low and slow, and you’ll find that the longer it cooks, the better it tastes, making it suited either to a luxurious braise in a Dutch Oven, or a slow cooker, if you have one. Make it in advance, and it tastes even better the next day. 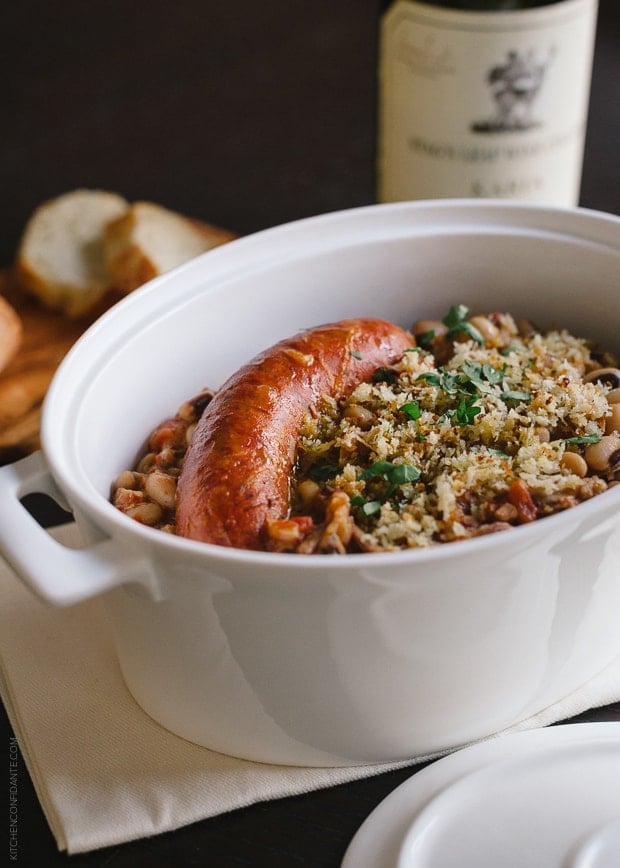 Black Eyed Pea Cassoulet – Cook it low and slow in a Dutch oven or slow cooker and you’ll find that the longer it cooks, the better it tastes. Do you believe in luck? Or do you believe more in good habits, drive and determination? My father raised us to rely on hard work and tenacity, but it was my mother who would encourage us to jump high at the stroke of midnight on New Year’s Eve. And I would. Filipino tradition asserted that the higher a child jumps on New Year’s, the taller they will grow. And I could use every inch I could get.

It was a nice thought. But as luck would have it, and my genetics, too, for that matter, I never grew beyond 5 foot 3…and three-quarters. It’s New Year’s Eve, and as we chill the bubbly and prep hors d’oeuvres, in the back of our minds, resolutions are forming, and goals for the coming year. Once the year starts fresh, it’s back to working hard, but once in a while, capricious luck will deal its hand. Let’s just cross our fingers it goes our way!

The tradition of eating black eyed peas for New Year’s was not one I grew up following. Southern in its roots, Hoppin’ John didn’t make its way up to my mother’s Filipino kitchen in New York, nor did I encounter it as I moved cross country. Between you and me, I had never heard of this tradition until just a few years ago, but I decided it would be a delicious practice to adopt. Like I said, sometimes we need all the luck we can get. And I found mine in a Black Eyed Pea Cassoulet. As you get ready for your celebrations, consider leaving a bowl of black eyed peas to soak for the night. As you recover from festivities on New Year’s Day, let this rustic cassoulet bubble and brew, nice and slow, until the layers of flavor meld with hunks of pork shoulder that shreds to the touch, and the plump chorizo nestled among the spotted beans, with the crunch of breadcrumbs that greet you with each bite. Spoonfuls of this cozy dish will be just right to ring in the new year. Frankly, it’s wonderful any day of the year. It may not be Southern, but it sure tastes lucky to me. Cook this cassoulet low and slow, and you’ll find that the longer it cooks, the better it tastes, making it suited either to a luxurious braise in a Dutch Oven, or a slow cooker, if you have one. Make it in advance, and it tastes even better the next day. 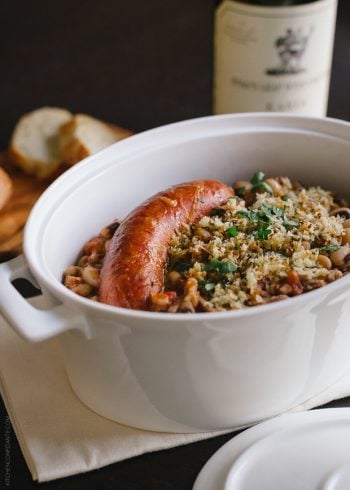 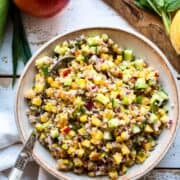 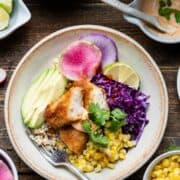