by Liren Baker on September 15, 2013 updated June 18, 2020 | 13 Comments This post may contain affiliate links. Please see Affiliate Disclosure in my Terms of Service.

Lobster Cobb Salad is a classic with an elegant twist. Perfect for special occasions or when you want to spoil yourself with something out of the ordinary! 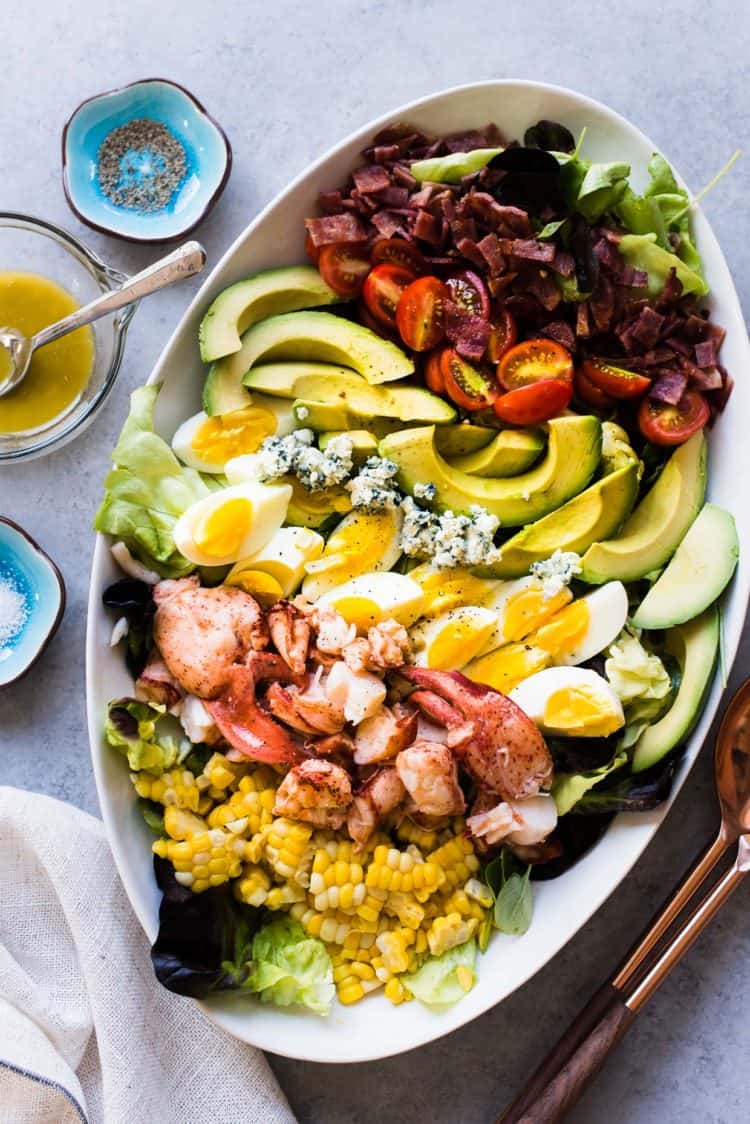 Lobster Cobb Salad is a classic with an elegant twist. 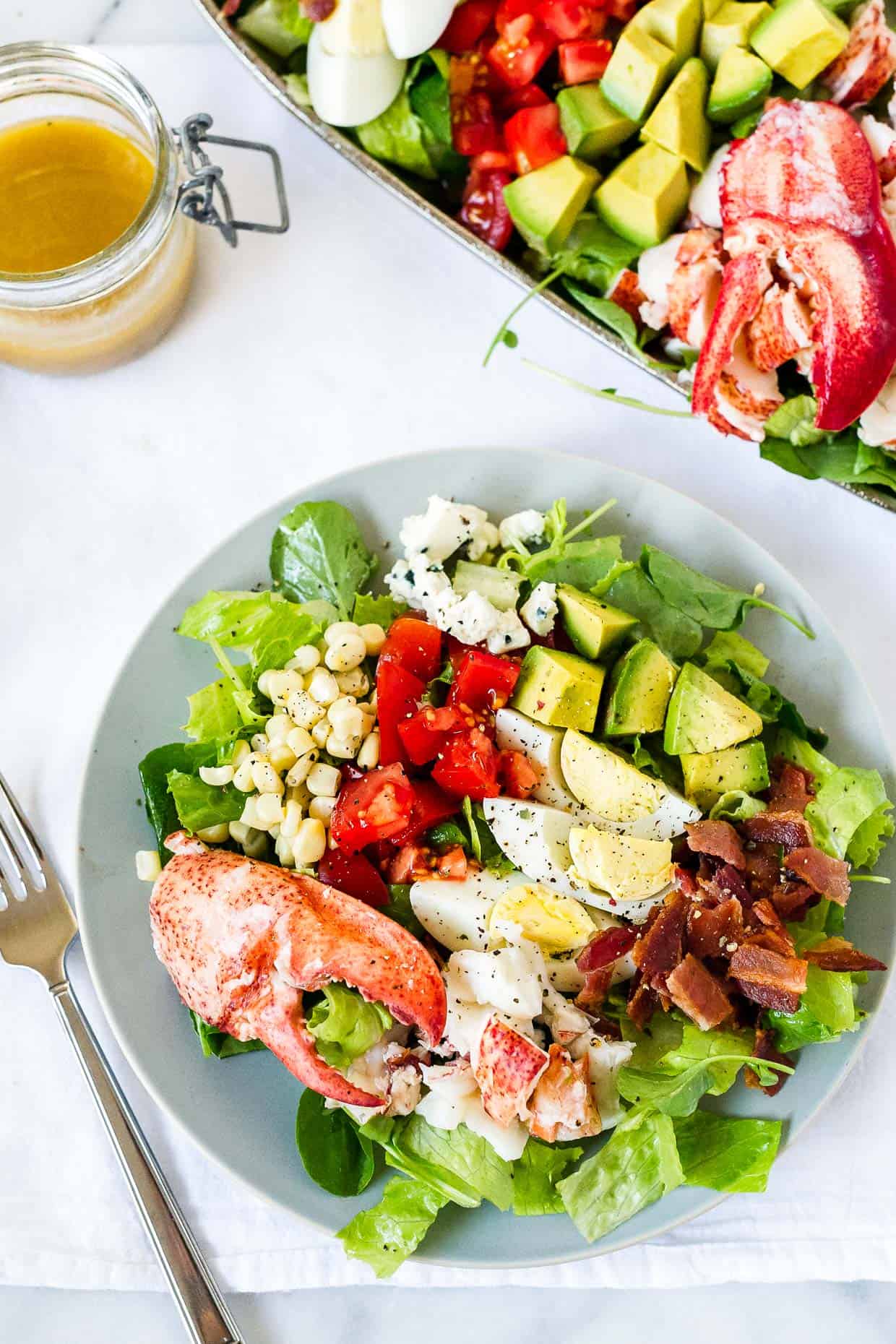 We were at an airport restaurant a few weeks ago, waiting for our flight back to San Francisco. I scanned the menu and saw the cobb salad. With memories of my father in law still raw in my heart, I ordered it, his favorite salad.

The phone rang several nights ago. It was my husband, on a business trip in LA. “What did you have for dinner?” I asked. I expected the answer to be sushi – especially since he is always eager to visit his favorite spot while in town. But after a long day, he was drained and decided to walk downstairs to the hotel restaurant instead. The Lobster Cobb Salad caught his eye. Each delicious bite reminded him of dad, and he raved, “You’ve got to make this.” Early yesterday morning, he went in search of lobster, and returned soon after with two plump specimens. Into the boiling pot they went, their fate destined for a delicious salad. As I chopped up the vegetables, I thought of my father in law; it was his birthday. It seemed right to make this dish.

He was so fond of this humble salad – it seemed to be his favorite thing to order whenever we ate together. It’s a salad you can find nearly anywhere, and I came to take it for granted. But I learned a thing or two as I was preparing this post. That it was actually a California original, created in 1937, at what was the Brown Derby restaurant in LA. That there was, indeed, a Mr. Cobb – the restaurant’s owner. That there is an ease as well as a finesse to assembling a beautifully composed salad. I wonder what my father-in-law would have thought of our lobster version? I like to think that he would have wholeheartedly approved. This is a classic with an elegant twist. But don’t be frightened – lobster prices have been fairly reasonable lately, and if its a matter of cooking the lobster, well, you can always buy it already cooked. 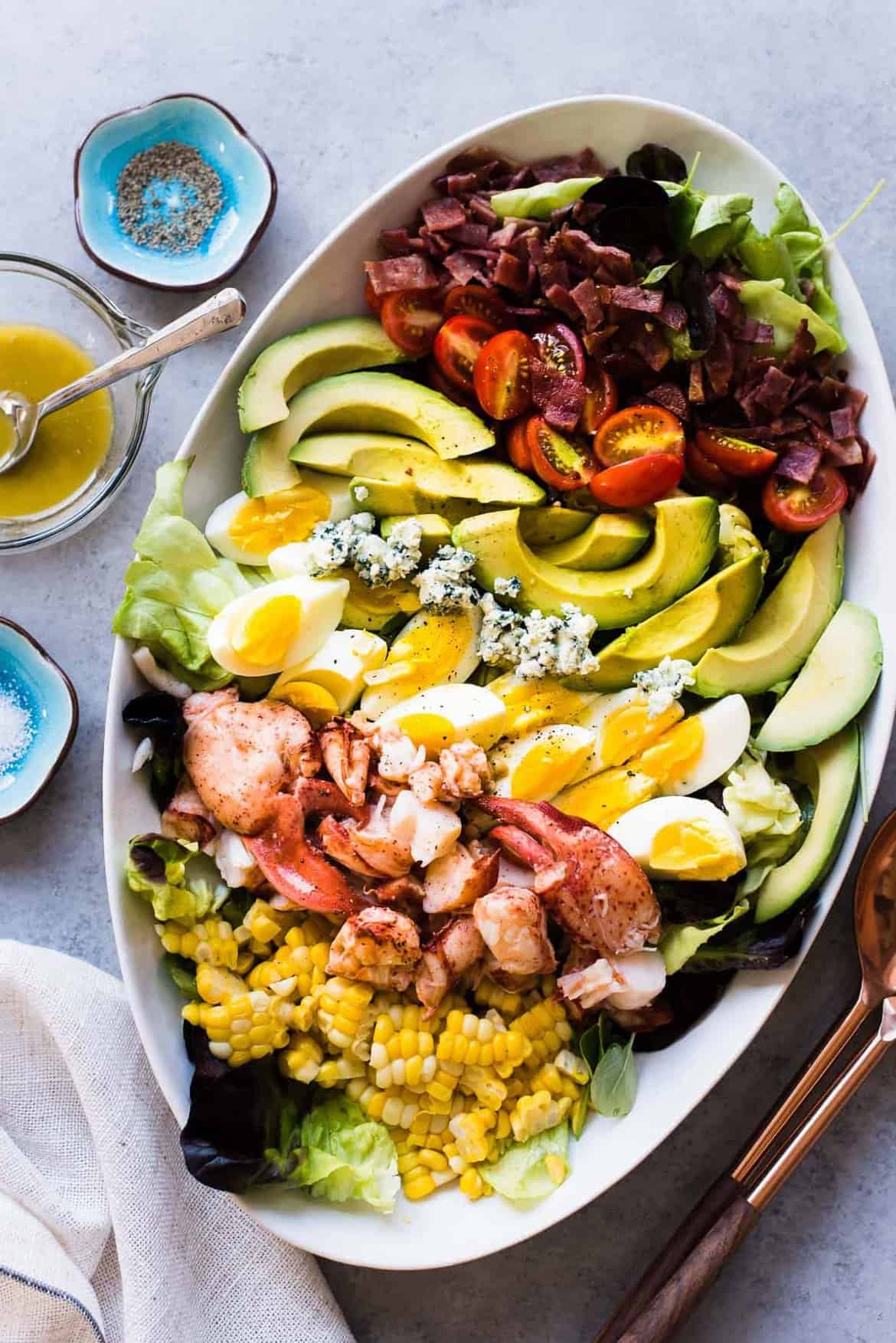 Make the dressing by combining the olive oil, vinegar, lemon juice, Dijon mustard, Worcestershire sauce, blue cheese, garlic, salt and pepper in a blender. This can also be done with a whisk, blending until creamy. Store in an airtight container in the refrigerator until ready to use. This can be done a few days in advance, and the flavors do improve with time. Be sure to whisk before using.

Toss the romaine lettuce and watercress in a large bowl with a few tablespoons of dressing. Arrange on a platter and top with the lobster, blue cheese, bacon, eggs, tomatoes, avocado and corn. Season with salt and pepper. Serve immediately.