by Liren Baker on March 11, 2019 | 16 Comments This post may contain affiliate links. Please see Affiliate Disclosure in my Terms of Service. 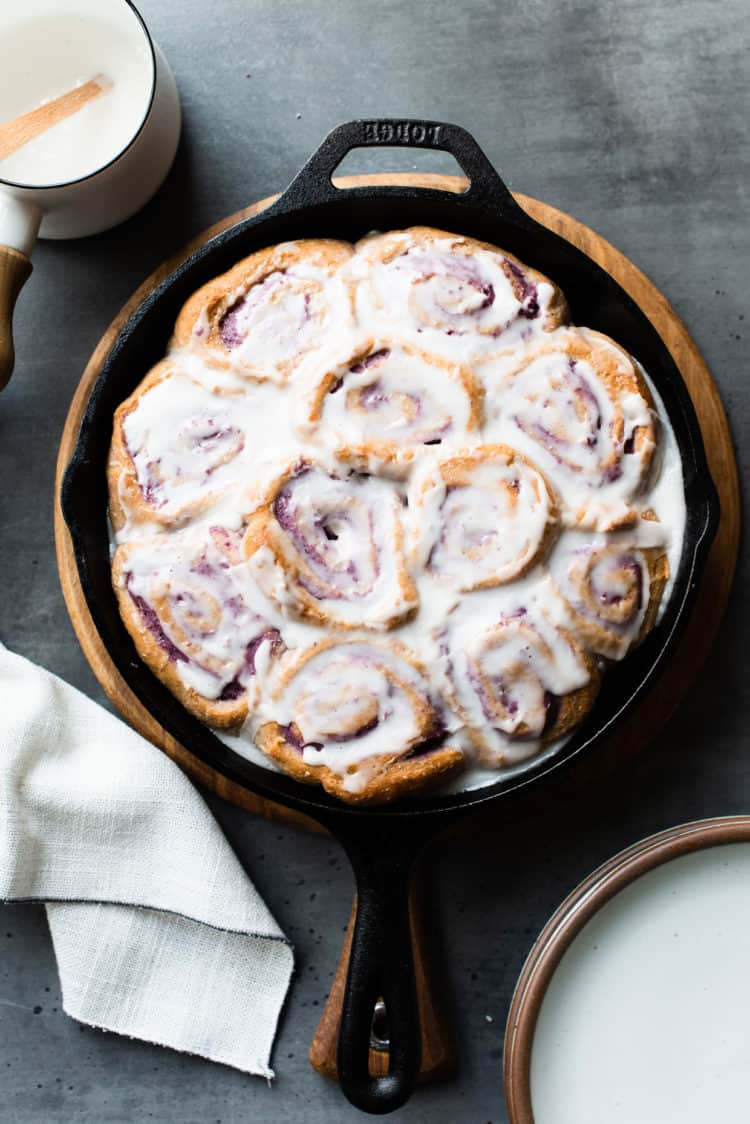 These rolls were four months in the making.

The idea started last November, just around the holidays. My coconut- and ube-obsessed children were chiming in their special requests for the holidays: sapin-sapin and puto, and spoonfuls of Ginataang Bilo-Bilo – all Filipino treats bursting with coconut and sticky rice.

My daughter, for whom the love for ube runs especially deep, asked if I could make ube bread, and I figured I could take it one step further and make ube rolls for Christmas morning. It sounded like the perfect idea!

But that never happened. 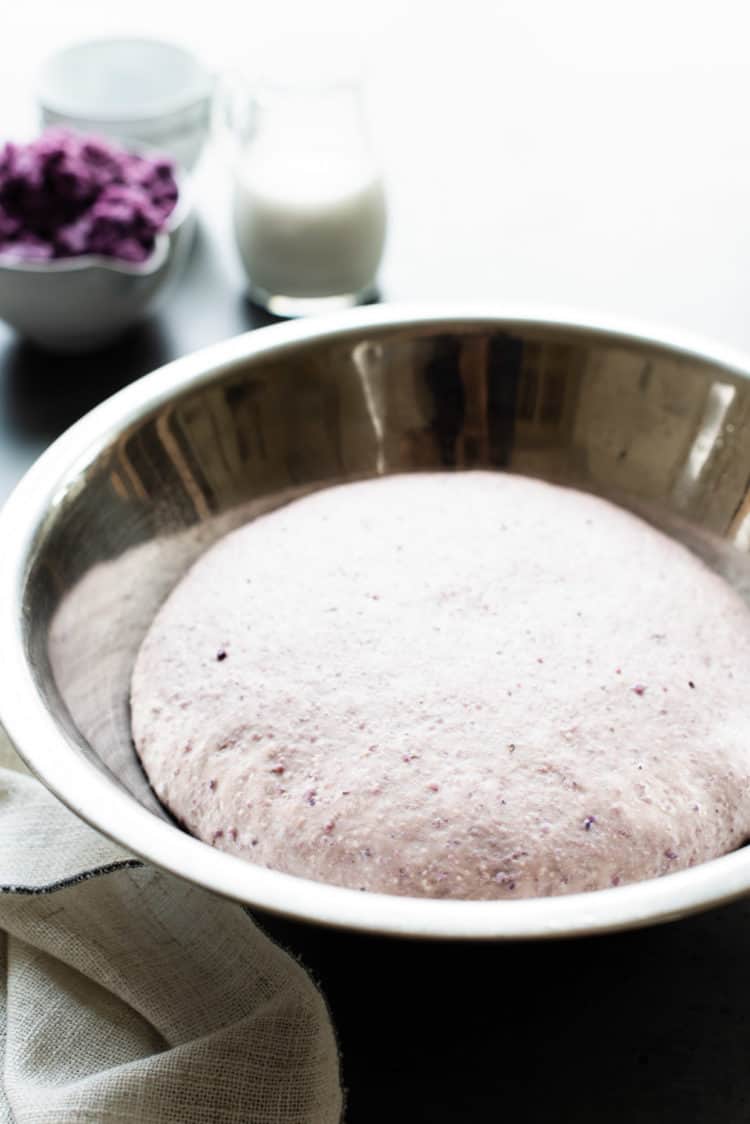 You know how it goes, time just gets in the way, and besides, the kids already have a teddy bear bread-baking tradition, so we kinda had Christmas morning covered. So I thought I would tackle it around the New Year.

And then that came and went. 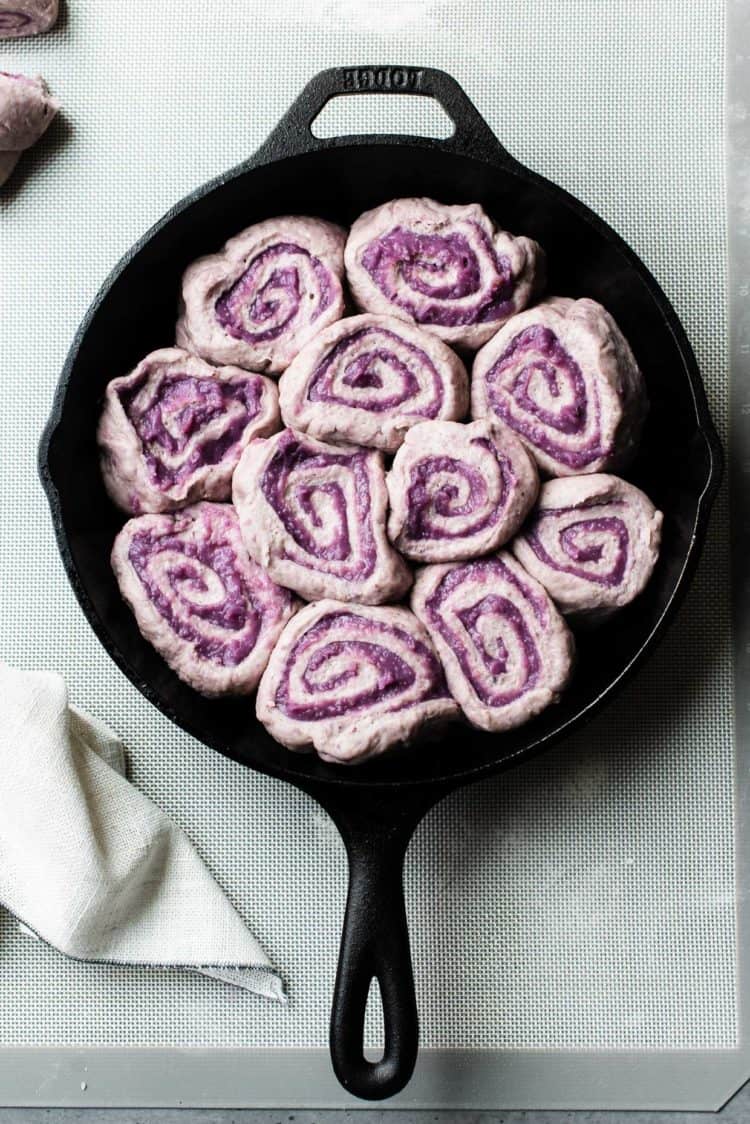 Until recently. I have had ube in the freezer and a jar of ube halaya in the pantry, ready for when I finally had a free weekend. I thought time would be the greatest challenge, but actually, the challenge came when my husband decided to retry a vegan diet several weeks ago. I knew the kids would love whatever version of the rolls I made, but I know my hubby, who is missing the occasional treat, would appreciate if he could taste these coconut ube rolls, too.

The decision to make the ube rolls vegan was solidified when I opened the store-bought jar of ube halaya (which is decidedly not vegan) to find it had not been sealed properly and there was a ring of mold growing near the rim. I had to toss it and make my own – may as well make my own filling from scratch while the dough proofed. 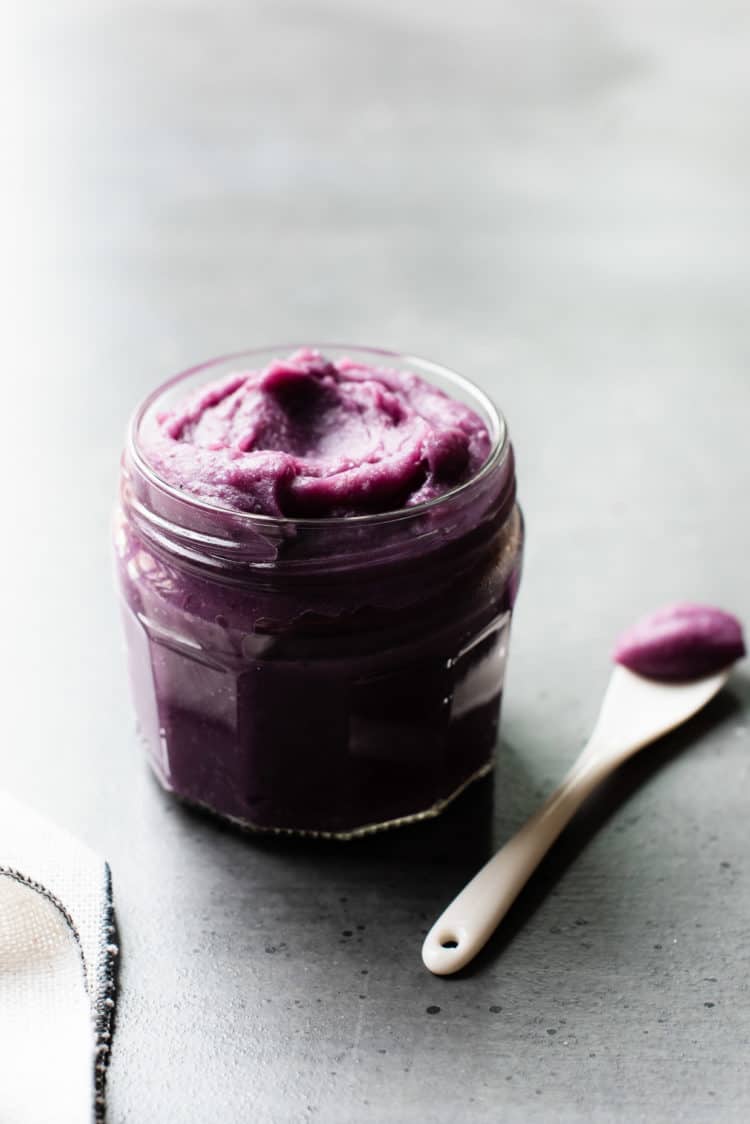 It was a blessing in disguise! I made my own coconut ube filling, and unlike a traditional ube halaya, which takes perhaps triple the time, this filling came together in a snap, and I was able to control the sweetness to my liking (read: not too much at all). 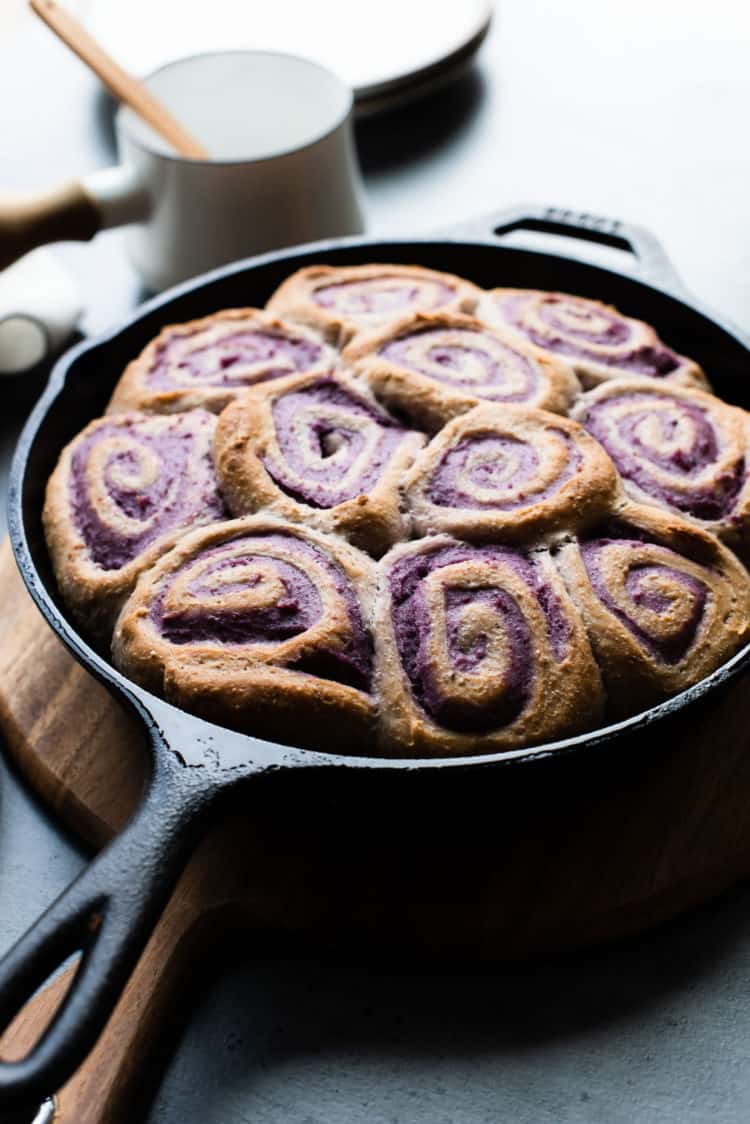 These rolls are what I would consider a lightly sweet, hearty breakfast roll – if you’ve ever had sweet potato challah or sweet potato pancakes, you will love these purple yam rolls! Drizzled with a coconut glaze, it’s kind of hard to resist, and between you and me, making it vegan was a bonus, since it was a treat we could all enjoy! 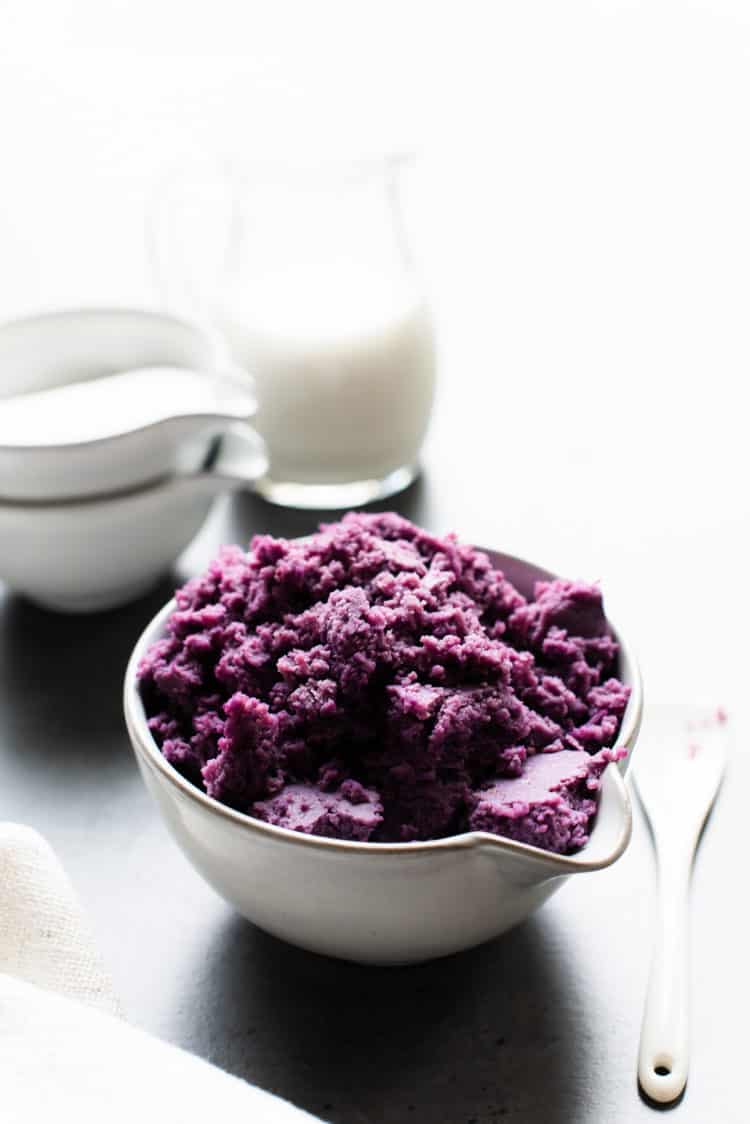 Ube (pronounced “oo-beh”) is a purple yam species in the Philippines, a tuberous root vegetable. Purple yam is used in Filipino sweets and desserts and can be found fresh, frozen and in powder form. You can even find ube extract! From ice cream to cakes, doughnuts and jam (ube halaya), ube is extremely versatile and gaining popularity in the United States.

Ube vs Taro vs Bene-Imo

Are ube, taro and bene-imo (Okinawan sweet potato) the same?

Each one is different, although here in the US, they are often labeled interchangeably. Here are the key differences between ube, taro and bene-imo:

Ube is a purple yam most often used in the Philippines (and Hawaii) in desserts. Ube has purple to brownish skin and purple flesh. It’s often found frozen stateside, but either fresh or frozen grated ube is used in everything from ube halaya (ube jam) to sweet ube bread and ube ice cream!

Taro is a root vegetable (known as gabi in the Philippines), that is found in recipes all across Asia. You can find it as a flavor in boba milk tea, as a filling in taro buns, and more. Fresh taro has a brown outer layer, but the inside of the root is white or very light lavender, sometimes with streaks of purple. Food coloring is often used to enhance the hue.

Bene-imo is a purple Okinawan sweet potato, the peel can be white or brown, but the inside is a deep purple color. It is used in a wide variety of sweet and savory dishes in Japan and Hawaii — and perhaps the most popular of the three to adapt to American dishes such as sweet potato pie. 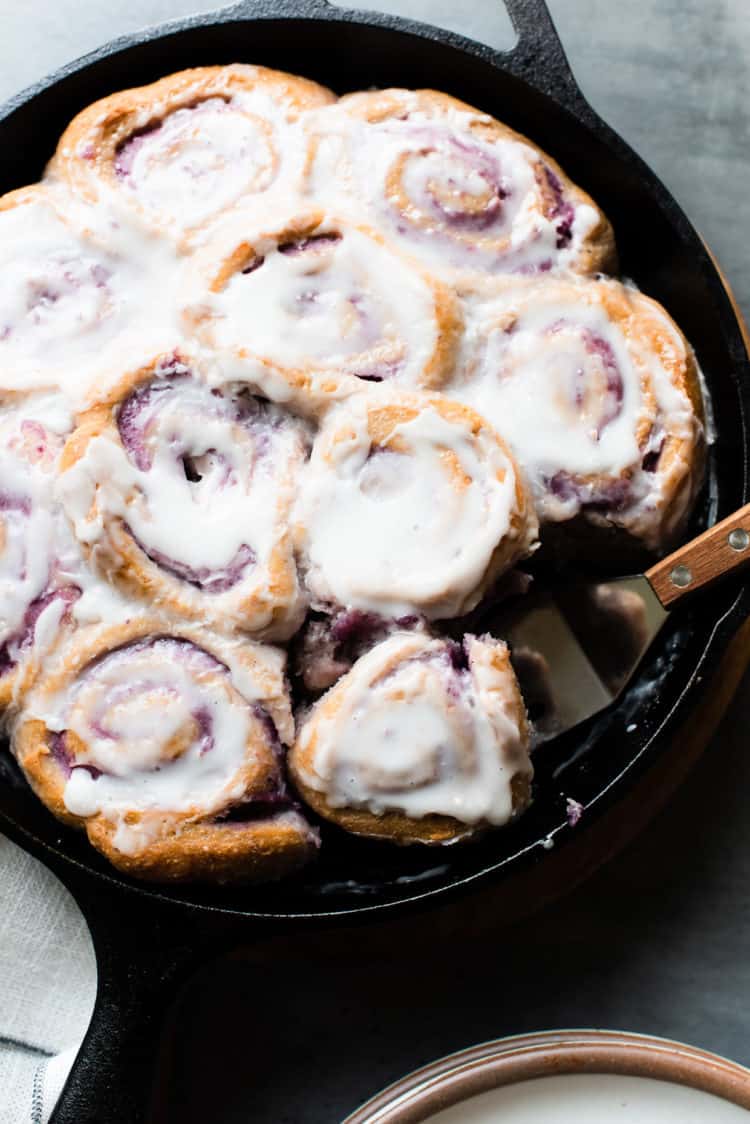 If you love cinnamon rolls, and have ever tried sweet potato cinnamon rolls, then these Coconut Ube Rolls are for you! Ube is a purple yam popular in desserts in the Philippines, and is the star of these sweet rolls, from the dough to filling. Not too sweet and perfect for breakfast, these simple rolls are also vegan! 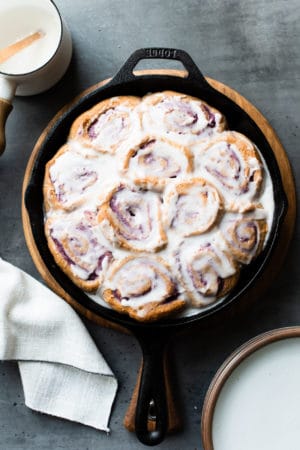 For the filling (see notes):

Dough based on Sweet Potato-Pecan Cinnamon Rolls, via Tasting Table.