by Liren Baker on August 27, 2021 | 21 Comments This post may contain affiliate links. Please see Affiliate Disclosure in my Terms of Service.

Blistered Padrón Peppers with Buttermilk Aioli are perfect served as an easy appetizer or as an addition to a charcuterie board. 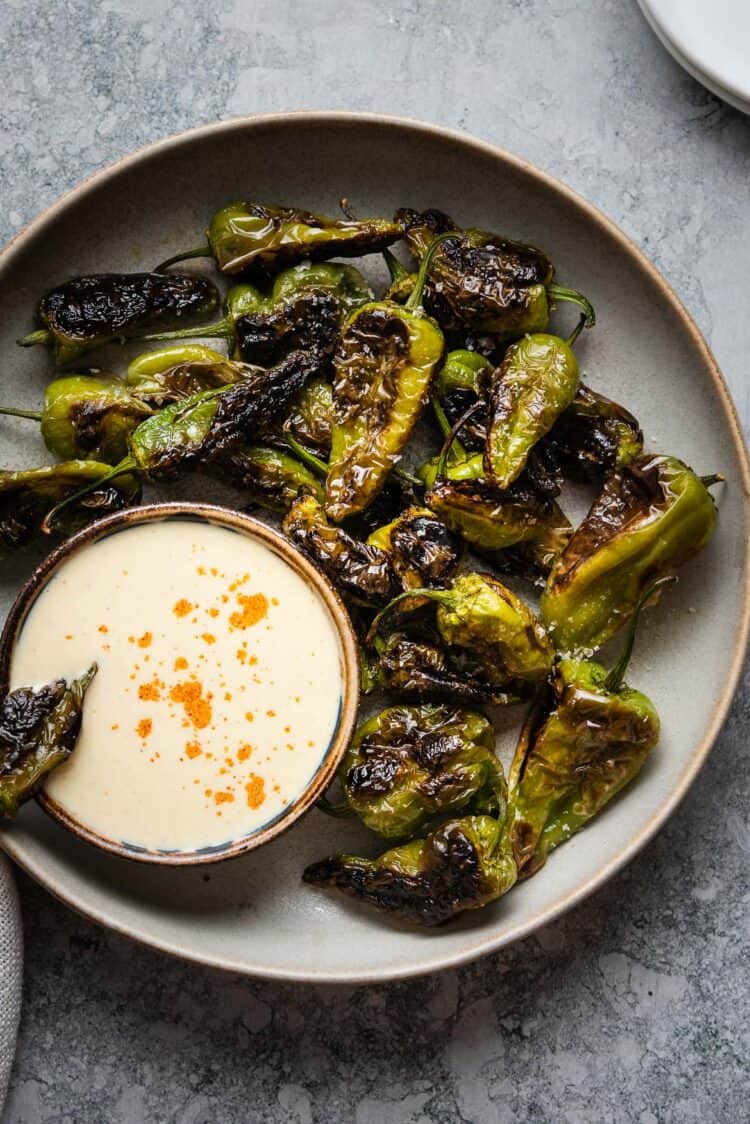 Blistered Padrón Peppers with Buttermilk Aioli are perfect served as an easy appetizer or as an addition to a charcuterie board. The buttermilk aioli is a must. Make plenty, because these peppers will be devoured in no time.

Note: This post first appeared July 28, 2013 as part of the Simple Sundays series. The recipe has been updated from the archives with updated content and photographs, as well as improved kitchen notes and recipe annotation. I hope you enjoy this favorite from my kitchen!

I took a breather last week. You may have noticed things were a little quiet here the last few days. While I wish I could tell you that I was on a remote island, digging my toes in fine sand while balancing a chilled glass of some rum-infused drink in one hand, I was very much here at home, working on some very exciting projects.

However, the time I allowed myself between projects was used to dig through cabinets, purging and organizing. We spent much of last weekend going through piles of old books, recycling papers, and giving our office space a good deep clean.

We go through these purges every so often, but for some reason, it is the books that give me the hardest time. For many years, books were the one possession I found hardest to let go. Once a book was read (and reread), they were a part of me, a member of the family.

The mere thought of getting rid of a book was extremely difficult. Some were badges of honor (like all those textbooks I kept from my clinical psychology program). Some were mementos of childhood (Anne of Green Gables, Pride and Prejudice). And as I got older, sentimental bits of early motherhood (Goodnight Moon).

I’ve learned to say goodbye to many books. Moving several times and dealing with a growing family and shrinking storage space will teach you how. But if it were up to me, I would have that library, tall towers of built in shelves lining the walls, surrounding me with these old friends.

Amid the purging and the projects, I stumbled across these plump Padrón Peppers at the market, to my surprise and excitement. The last time I bit into a Padrón, I was with my husband and our friends at Frances, in the Castro district.

The buttermilk aioli served alongside was cool and tangy, the perfect little pool of creaminess for dipping the just-blistered, peppery Padróns. Once I had a chance, I knew I would recreate Blistered Padrón Peppers with Buttermilk Aioli at home.

Have you had the chance to enjoy Padrón peppers? If not, I hope you do soon, they’re such a treat, especially if you love some spice…and the element of surprise.

Padrón peppers are much like books, you see. Some are mild and pleasing. Others are punchy with incredible heat. You never know what you’re going to get. You just have to dig in. But that’s part of the fun, isn’t it?

Try serving these peppers for an easy appetizer or adding them to a charcuterie board.

You may have encountered Padrón peppers and Shishito peppers and wondered, “what is the difference?”

Padrón peppers, or pimientos de Padrón, are from Spain and popular served as tapas. Shishito peppers, which originate from Japan, are their similar Asian cousin. Both peppers come in varying degrees of spice, from mild to extremely spicy, making the process of eating them much like a game of Russian roulette. Either way, they’re delicious!

You can usually tell the difference between the two in terms of appearance. Padrón peppers are generally shorter and rounder, while Shishitos are longer, with a little bit of a thicker skin. Shishitos are also named as such because the tips of the peppers resemble the head of a lion (shishi or jishi in Japanese).

Feel free to use either pepper in this recipe.

Simple and insanely delicious, it's hard to stop eating these spicy peppers. A perfect addition to charcuterie or as an easy appetizer, Blistered Padrón Peppers with Buttermilk Aioli are the perfect party food. The buttermilk aioli is a must. Make plenty, because they'll be devoured in no time. 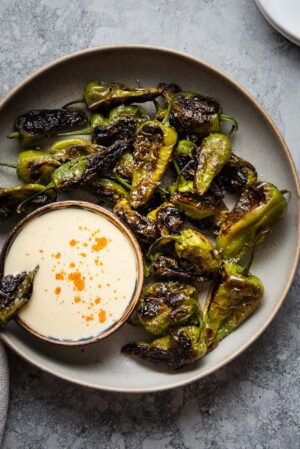 For the Buttermilk Aioli:

For the Blistered Padrón Peppers