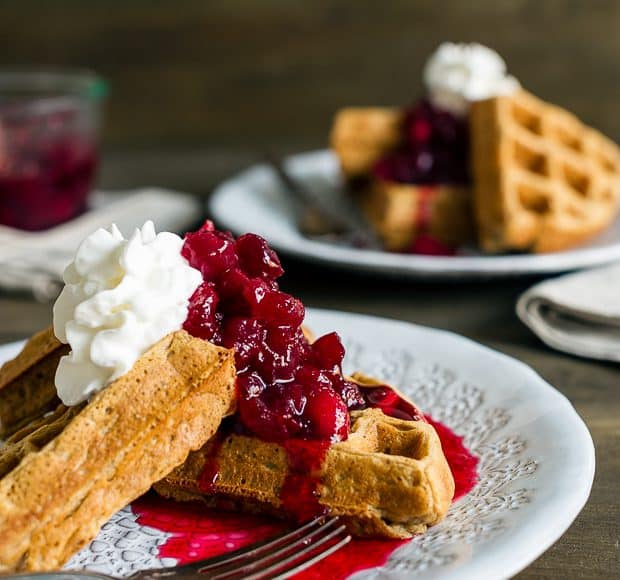 by Liren Baker on December 07, 2014 updated December 17, 2019 | 11 Comments This post may contain affiliate links. Please see Affiliate Disclosure in my Terms of Service.

Taste the holidays with this recipe for Gingerbread Belgian Waffles! Topped with cranberry compote and whipped cream, this special treat will fill your kitchen with the aromas of cinnamon, spice and all things nice. 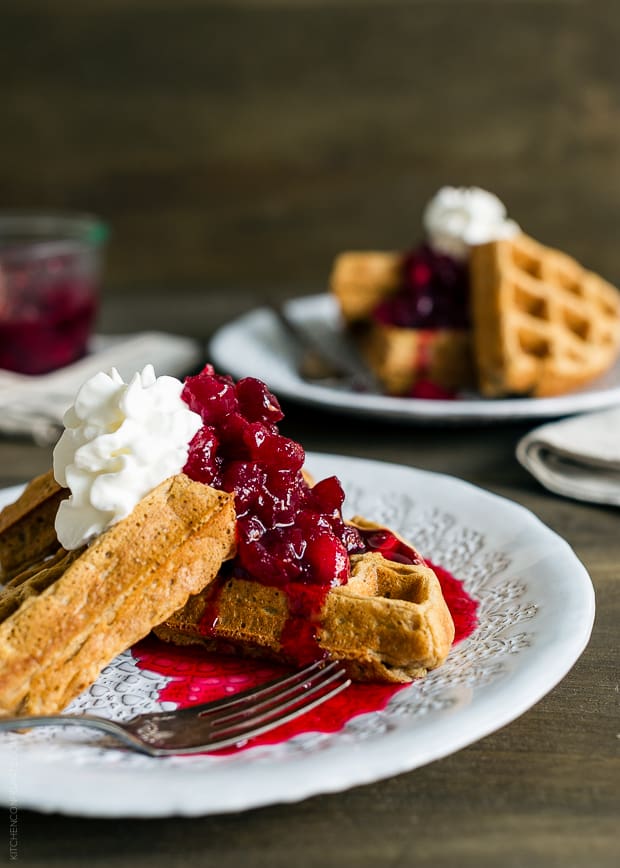 Gingerbread Belgian Waffles topped with cranberry compote and whipped cream will fill your kitchen with the aromas of cinnamon, spice and all things nice! My dad still has the kitchen table – the one with the dark wood laminate, inlaid stripes and metal legs, the one with the matching black, vinyl chairs, the one where I would sit in the mornings before school, meticulously spreading the butter into every nook and cranny of my frozen waffles. I wouldn’t take a bite until the buttery goodness was melted, then the syrup carefully drizzled from the plastic lady, not a single square missed. Waffles had to be just so and were very serious business. 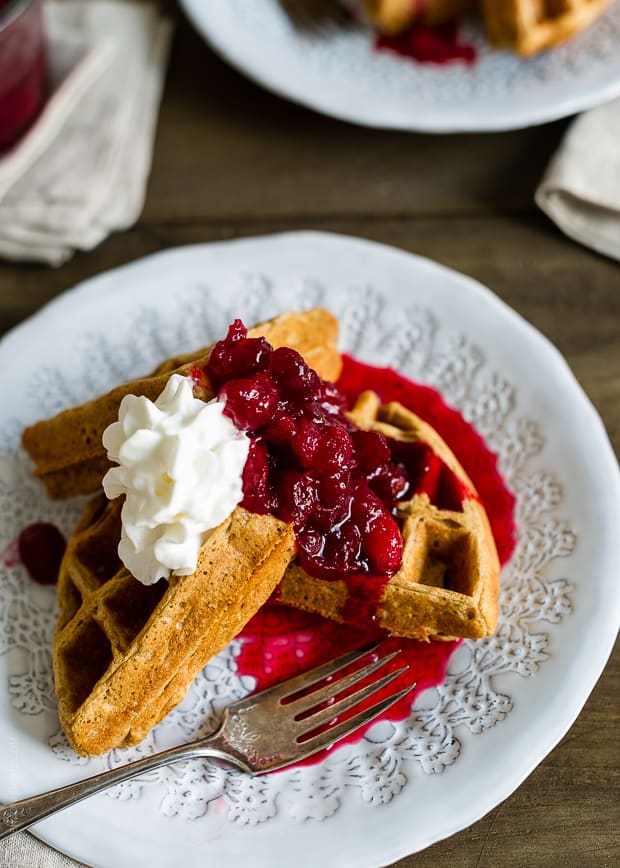 I can’t tell you the last time I buttered my waffles. Somewhere along the way, I’ve dropped the butter habit, replacing it with drizzles of pure maple syrup, compotes, and dollops of whipped cream. I’ve also lost the patience to make sure each nook and cranny is smothered, but I think of that little girl each time I eat a waffle. I’d love to know what she would do if I made her these Gingerbread Belgian Waffles. 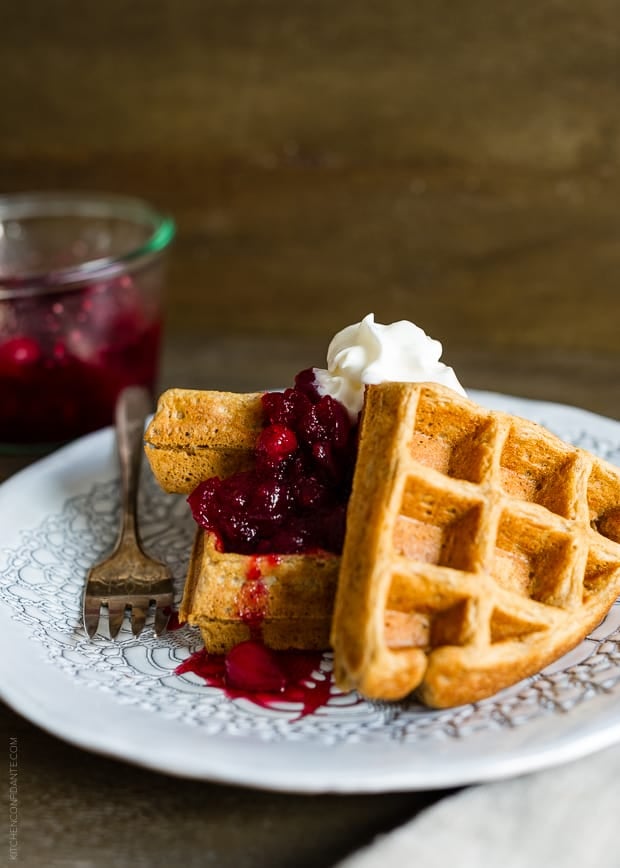 With Christmas classics playing in the background, and our tree twinkling and shining, all I want is everything Christmas, with its cinnamon and spice and all things nice. Every nook and cranny of the kitchen was filled with the aroma of gingerbread as these waffles baked, and all it took was a topping of cranberry compote and some whipped cream before I devoured them in minutes. Butter would be heavenly, but I just couldn’t wait. There’s just less time to waste. 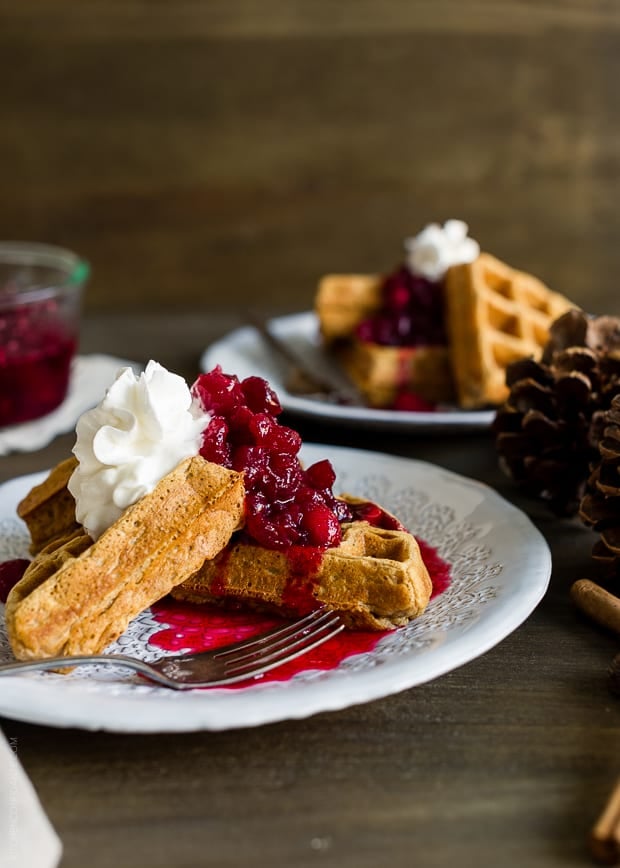 Taste the holidays in every nook and cranny of these Gingerbread Belgian Waffles! Make the batter the night before, and you'll have a festive breakfast within minutes. 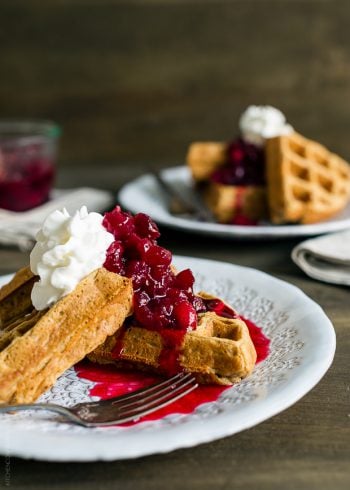 Make it ahead: The batter can be prepared the night before and waffles baked the following morning. Use up holiday leftovers: These waffles pair beautifully with any leftover cranberry sauce/compote! Adapted from Belgian Buttermilk Waffles with Glazed Bananas, Gourmet (June, 2005), via Epicurious.