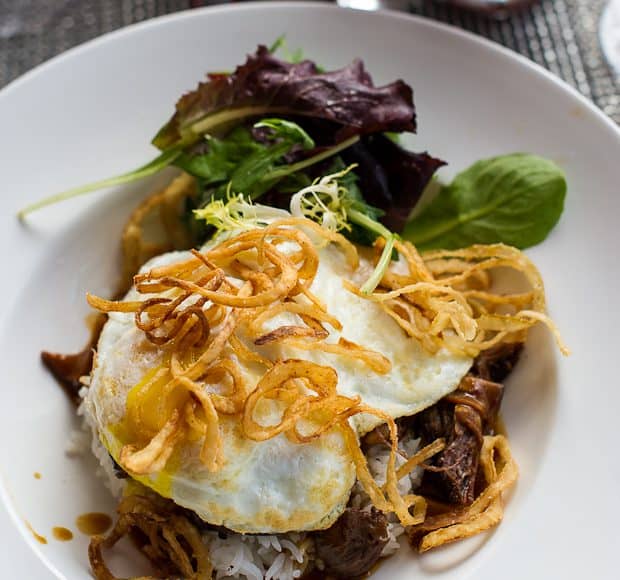 by Liren Baker on December 08, 2012 updated December 29, 2022 | 9 Comments This post may contain affiliate links. Please see Affiliate Disclosure in my Terms of Service. 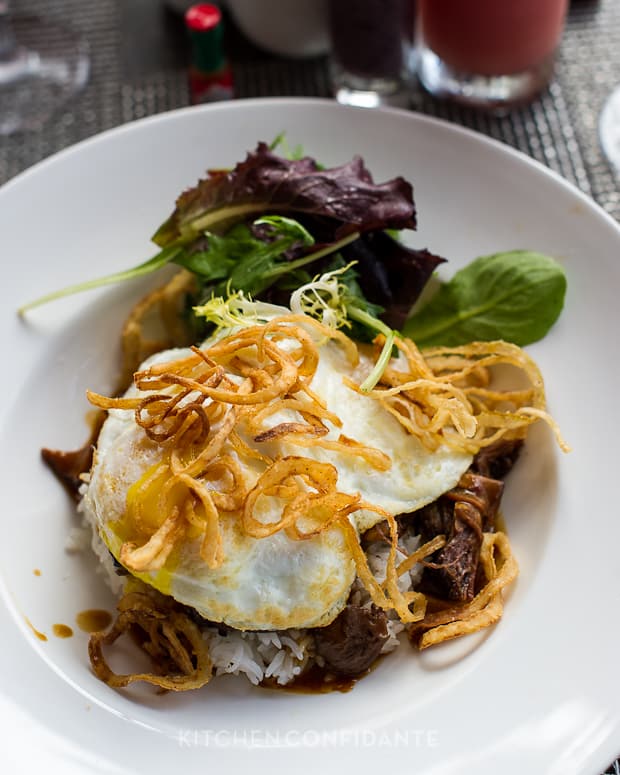 I was so taken with the Royal Loco Moco at The Royal Hawaiian’s Surf Lanai Restaurant that I couldn’t wait to recreate it at home by creating Short Ribs Loco Moco. Maui onions were replaced by yellow onions and Hamakua mushrooms with crimini, but the spirit is the same. I like eating it with a few dashes of Tabasco. If this is the closest I can get to having some aloha in my kitchen, then I’m quite content.

Back in my parent’s house in New York, there is a tall curio cabinet. It flanks a wall between the living and dining rooms, and in it, are dolls. Small dolls that were lovingly collected as my family traveled from country to country, year after year. Each one is in traditional dress, souvenirs that my mother made sure we brought home, wherever we were in the world. Some are kitschy, and some are truly ornate, but each one is priceless in its sentimental value.

By the time I was in high school, that curio cabinet was quite full, and my parents realized that we needed another one. Not for more dolls, although that would have been a good idea, as they were running out of room. Instead, they realized that my own collection was growing. When we visited Brazil and Argentina, I somehow decided I was going to collect turtles. Year after year, vacation after vacation, my turtle collection was growing. Turtles that were made of shells, handblown glass, amber, opal, and even bread dough. They purchased another curio cabinet, a smaller one, to house my turtle friends.

I moved my turtles here shortly after I married. They still live in a box, each one carefully wrapped. I’ve moved on to collecting other things, I guess.

A few weeks ago, I went away. If you keep in touch on Instagram, then you will know that we were able to steal away to Waikiki for several days. It was a good little getaway, and even though I saw plenty of turtle figurines I could bring home, instead I was collecting delicious tastes. And I had a little help from friends on Instagram. Myra, also known as bonnevivante, knew we were staying at The Royal Hawaiian. She commented, “You must try the Royal Loco Moco at the restaurant for breakfast.”

Boy, was she right.

The loco moco. I had never had one before, but it’s probably just as traditional in Hawaii as a luau. There are many ways to go about it, but at the very basic, a loco moco is a hot plate of white rice, topped with a hamburger patty, a fried egg, and brown gravy.

After our first taste, we were hooked. Each day thereafter began with a hearty Royal Loco Moco, which, looking back, is probably good that only meant two more mornings. Because before we knew it, it was time to return home.

But now I had those flavors in my mental suitcase. A souvenir.

I bought some gorgeous short ribs. Then began the process of braising them.

Wine was in order. Do you freeze any excess wine? It comes in handy.

I poached the eggs and fried up some spicy onion rings. They crowned the short ribs, the sauce swimming in the rice bed below. The islands came to us for dinner.

The humble Hawaiian plate lunch is glorified in this version, and while yes, it is an amazing way to start your day, it’s perfectly elegant enough for a dinner with friends. I love that you can make your short ribs the night before and when it comes time to serve, it takes just a few minutes to poach your eggs. That type of ease, I am loco for, for sure.

I was so taken with the Royal Loco Moco at The Royal Hawaiian’s Surf Lanai Restaurant that I couldn’t wait to recreate it at home. Maui onions were replaced by yellow onions and hamakua mushrooms with crimini, but the spirit is the same. I like eating it with a few dashes of Tabasco. If this is the closest I can get to having some aloha in my kitchen, then I’m quite content. 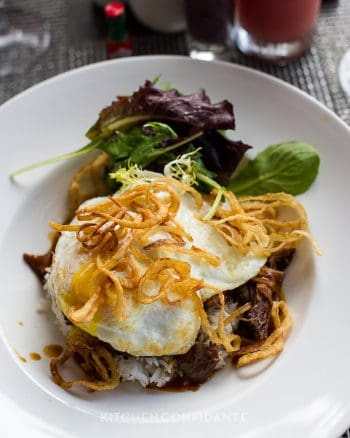 How I Cook Rice