by Liren Baker on June 24, 2019 updated September 25, 2022 | 30 Comments This post may contain affiliate links. Please see Affiliate Disclosure in my Terms of Service.

Homemade ice cream. It’s undeniably the best. And it’s even better when you create a rich custard, add homemade blueberry filling, and then bake a crisp to stir in – giving the ice cream little crunches in the best ways! Yep. It’s blueberry crisp ice cream. 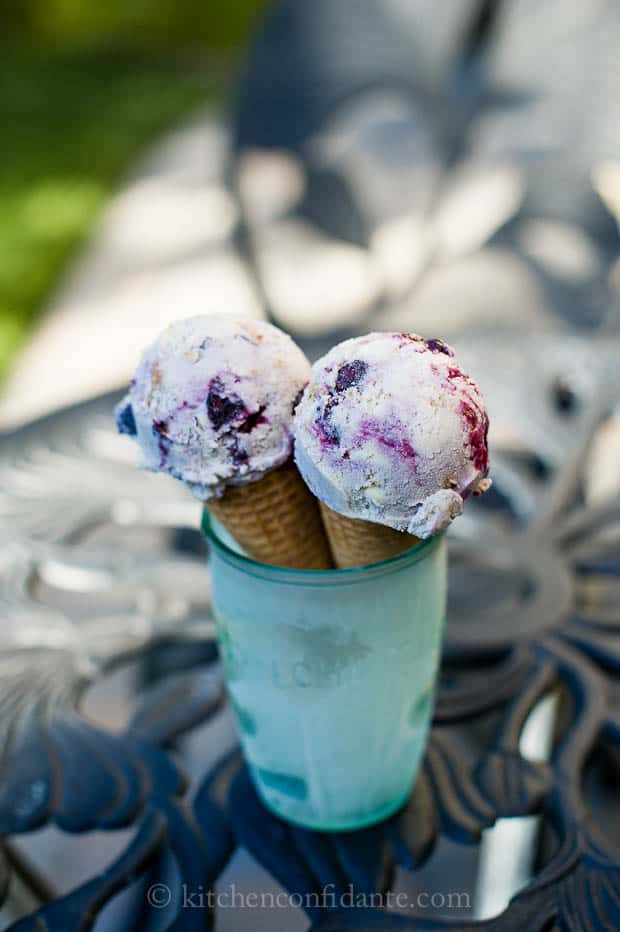 Is there anything more iconic to childhood than ice cream? And yet does anyone ever grow out of their obsession with the frozen treat? This blueberry crisp ice cream takes homemade ice cream up a notch – including not only fun color and flavor with blueberries, but also magical crunchy “crisp” that takes this ice cream from good to addictive.

These are some of the questions I’ve been fielding this week. Apparently, they think I must be ancient.

I can understand some of the questions. My kids hear me talking of a world without computers or cell phones. They hear stories of when I used to drag the telephone from the kitchen into my bedroom, with a 24 foot coil stretching the length of the house. On a recent vacation, they spotted a pay phone and it became one of those teaching moments – imagine, you put money into a slot to make a call!

These days, it’s totally normal for them to ask, “are you going to tweet that?” or, “oooh, can you put that on Instagram?”

Wait till I tell them about ice cream.

During those, ahem, simpler times, ice cream meant just a few flavors. Vanilla. Chocolate. Strawberry. Fancy meant Butter Pecan or Pistachio, Neopolitan or Rainbow Sherbet. Eventually, Baskin Robbins gave us 31 flavors, and wow, that was bold. And when Ben and Jerry’s came along, they were practically the ice cream messiahs.

The flavors you can find today are just so much more exciting – herbs and cheeses make their way into ice creams, and even balsamic reductions. These kids don’t know how good they’ve got it.

I was in an ice cream making mood the other day – the bug has bitten, ever since my foray into Chai Tea Ice Cream reignited my passion for making ice cream. This time, I was craving Blueberry Crisp, but I wanted to try it inside out and a la mode. I stirred the custard and coaxed it into creaminess, then made the filling and baked off the crunchy topping (the best part, don’t you think?). I churned and mixed it all up together into a frozen dream. Each lick was heaven.

It’s good mama! the kids called out as they ate their cones outside. These kids. I think tomorrow I’ll tell them about how I used to walk to school. In the snow.

To me, there’s nothing more summery than Blueberry Crisp, a la mode. Put it all together in this dreamy ice cream. I promise you, you won’t regret it.

Ice cream base based on Tyler Florence’s Vanilla Ice Cream Base, via Food Network.