by Liren Baker on July 08, 2019 | 2 Comments This post may contain affiliate links. Please see Affiliate Disclosure in my Terms of Service.

When rhubarb is in season, make a Strawberry Rhubarb Crisp! A fruit crisp is the simplest summer dessert, vegan-friendly and irresistible with ice cream! 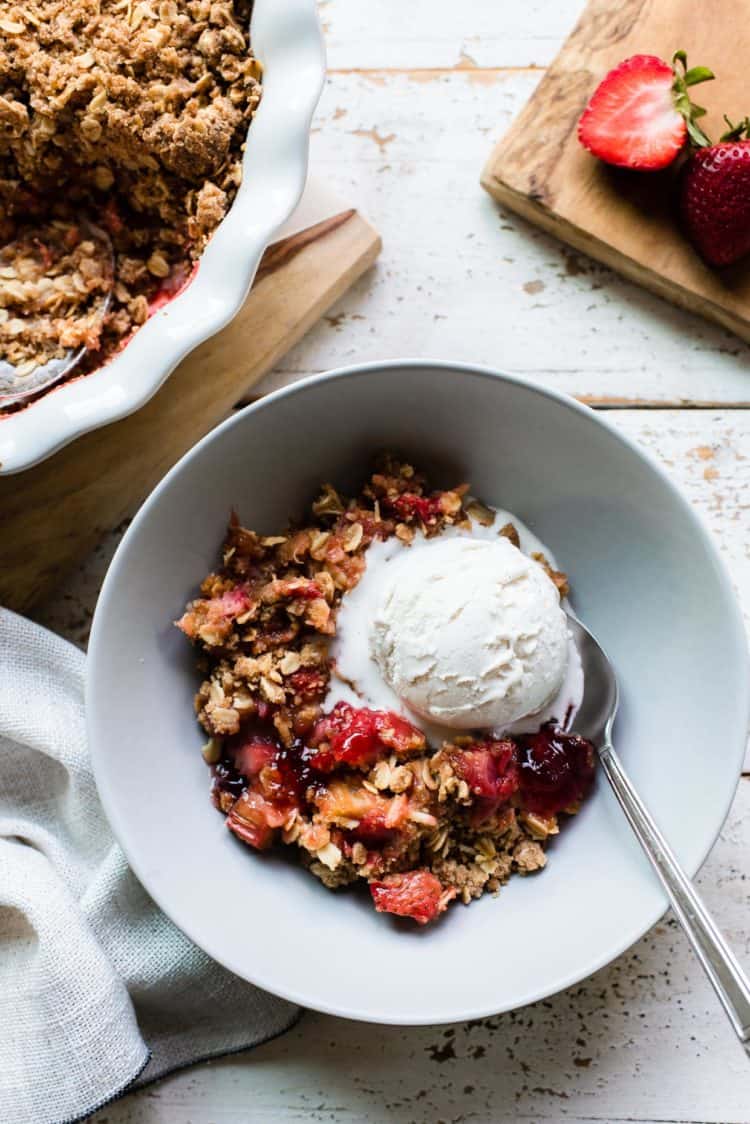 When rhubarb is in season, embrace the tang in a Strawberry Rhubarb Crisp! A fruit crisp is the simplest summer dessert, and irresistible when served warm with a scoop of ice cream. It can also be easily made vegan. 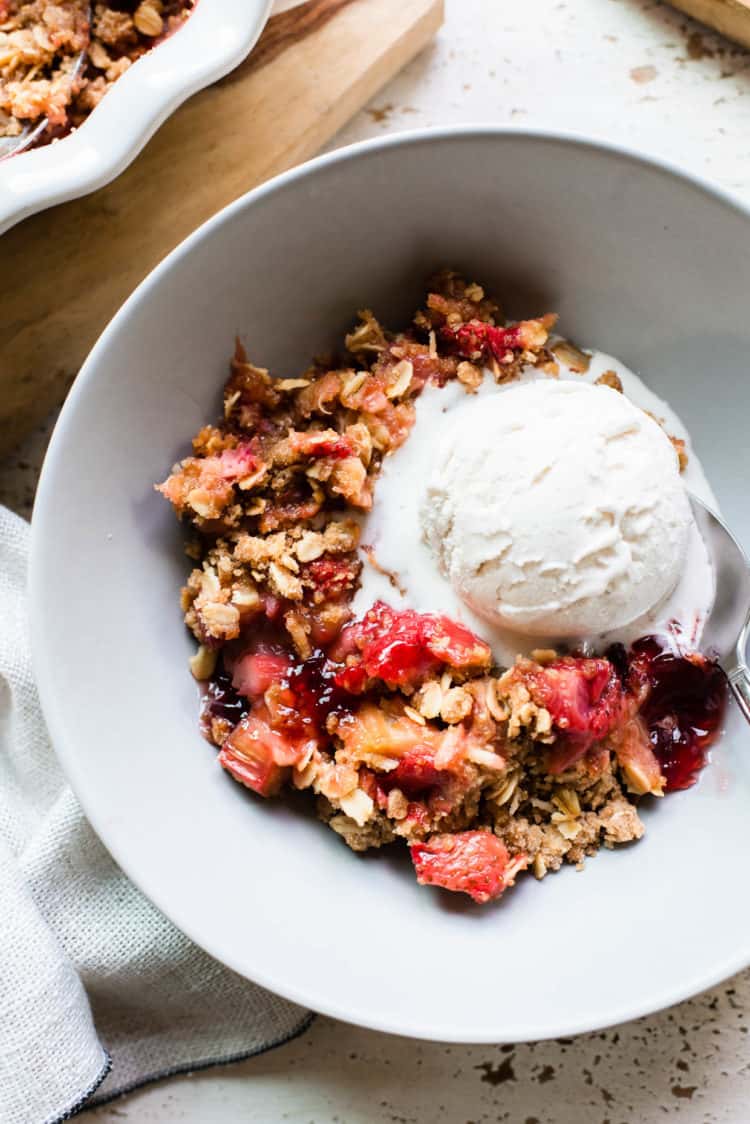 As soon as summer rolls around, one of the first things I have to make is a fruit crisp — it’s one of those old-fashioned, homey desserts that appeal to my desire for sensible ease, and one that can easily satisfy a crowd. Who can resist warm fruit filling mingled with a crumb topping in a pool of melting ice cream?

I dare you to try!

Plus, there’s no crust to crimp, and you don’t even need an appliance — one bowl and my hands (or a pastry cutter aka dough blender!) is all you need to whip up a crisp. You can even make it in advance, making it ideal for entertaining.

You can make a crisp out of virtually any fruit, but there’s something extra special about strawberry rhubarb crisp, its sweet and tangy jeweled fruit peeking underneath a crunchy topping! One bite and you’ll try to convince yourself to plant rhubarb in the garden, just so you can have rhubarb at the ready…at least that’s what I do.

HOW TO MAKE STRAWBERRY RHUBARB CRISP

Fruit crisps like Strawberry Rhubarb Crisp are one of the easiest summer desserts you can make, and one of my favorites to whip up. It’s easier than a pie, but equally delicious when served a la mode.

1. To make the crisp, you simply toss the strawberry and rhubarb in a bowl with some sugar and cornstarch. The sugar will sweeten the fruit, much like a jam, and the cornstarch will help thicken the juices so the filling is not too runny. 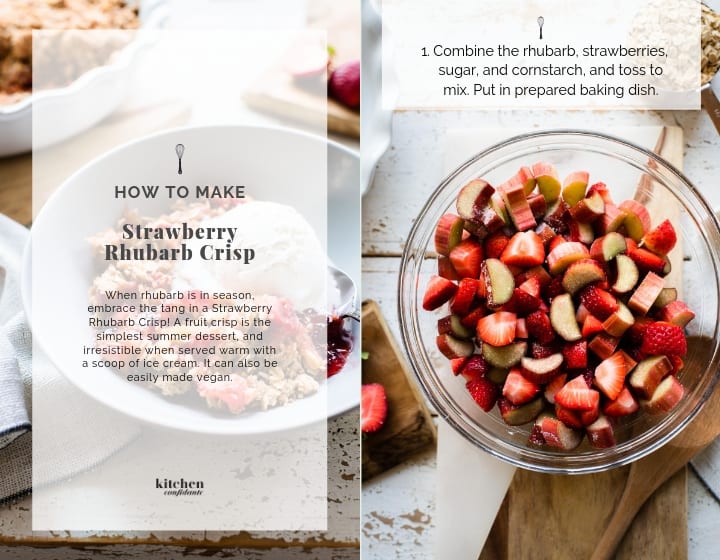 2. Make the topping by combining the flour, sugar, and butter — I like to use a pastry cutter or even my fingers, but you can also use a food processor if you wish. Simply cut the butter into the flour until you have coarse crumbs. Then add the oats and cinnamon and sprinkle over the fruit. If you want to make the crisp vegan-friendly, simply swap out the butter for your favorite vegan butter (mine is from Miyoko’s!).

3. Bake the crisp until the topping is browned and the fruit underneath is bubbling. Serve warm with ice cream! 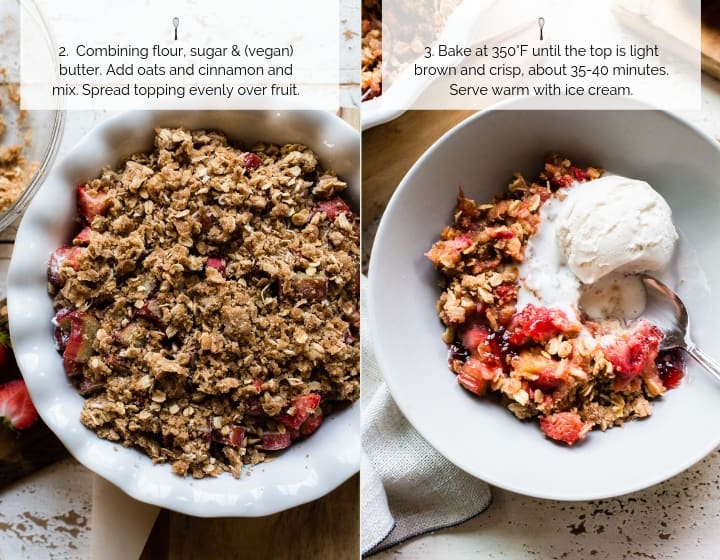 IS RHUBARB A FRUIT OR VEGETABLE?

Rhubarb is a stalky vegetable but is most often used in desserts and treated like a fruit. However, it can be used in savory dishes, as well, its tangy flavor lending itself well to either kind of dish!

Rhubarb is such a versatile vegetable, its sour flavor tamed with sugar and when combined with other fruit. Here are some more rhubarb recipes to try! 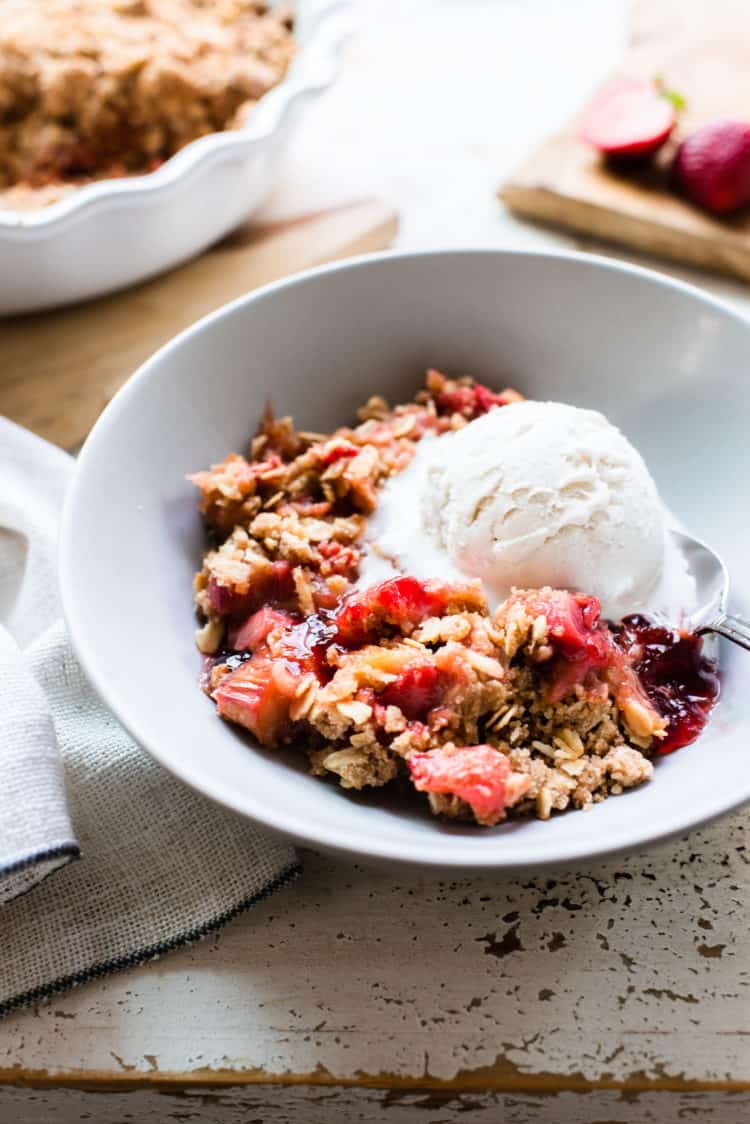 Disclosure: There are affiliate links in the post, see my Disclosure page to learn more.

When rhubarb is in season, embrace the tang in a Strawberry Rhubarb Crisp! A fruit crisp is the simplest summer dessert, and irresistible when served warm with a scoop of ice cream. It can also be easily made vegan. 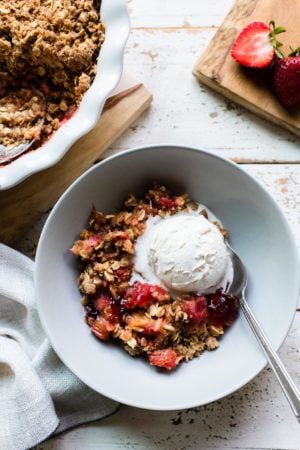 You can easily assemble the topping or the whole crisp in advance. Cover tightly and place in the freezer until you are ready to bake. That makes one less thing to worry about when you’re entertaining!

Fruit crisps are one of the easiest desserts to make vegan. Simply substitute the butter for your favorite vegan butter (I especially love using Miyoko's vegan butter, which is available at most major grocery stores). Serve with non-dairy ice cream.

Can I use frozen rhubarb and strawberries?

Yes, absolutely. This can come in handy when rhubarb is not in season and you are craving rhubarb. Frozen strawberries can be used, however, it is challenging to slice frozen strawberries in half, so you may have to settle for large fruit in your crisp. For this reason, I recommend sticking with froze strawberries as much as possible.